You are currently here! Uncategorized Effect of Flood on Pakistan Agriculture Land 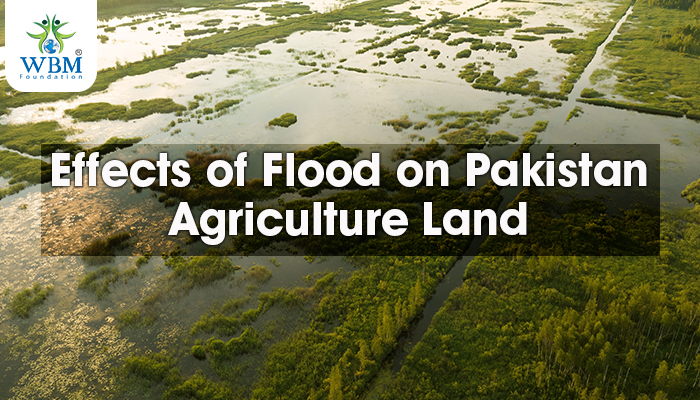 Deadly Flood in Pakistan 2022 affected 33 million people, a population greater than the population of Malaysia.

Since June 2022, Pakistan endured high humanitarian, developmental, and food crises due to floods and until now it is surviving through this devastating condition. Flood in Pakistan in 2022 caused one-third country underwater. This series of rainfall disturb Pakistan’s economy badly. It causes not only the destruction of infrastructures but also causes the loss of life and made the survival of people difficult. It impacted Pakistan in every aspect. Similarly, it impacted the agricultural land which looming already existing threat to food security.

According to United Nations:

Until now, Pakistan had received 2.9% rainfall more than the average 30 years of rainfall in the country which destroyed in Pakistan.”

Pakistan is agricultural land and an exporter of agricultural products. In Pakistan, food staples prices were already looming because Russia invaded Ukraine, and this major agriculture halt caused inflation in food.  Further, the Flash flood-hit 10 billion dollars loss of economy in form of damaging crops.

And this damage from floods creates an impact on the economy due to scarcity of the agricultural product. Pakistan’s Agriculture land is engulfed by the flood. The Swamp of these agricultural lands’ flushes away the crops. Similarly, livestock and the livelihood of people also flow down with it. The swathe of farmland and agricultural land flushes away, and the crop of cotton and rice is damaged.

According to the National Bureau of Statistics, Pakistan exported rice worth $2.3 Billion during the fiscal year 2020-2021. A report assessing the crop risk was conducted which revealed that flood destruction resulted in 1.9million tons of loss of rice production, equivalent to 80% loss of province forecast rice production. Similarly, 80% loss in sugarcane production and 61% of cotton production influenced due to floods. According to the report, Sindh faced an economic impact worth $ 1.3 billion alone.

The impact of floods on agricultural land is very high it is beyond the crop production loss. About 40% of people rely on agriculture employment, the fifth largest sector of the country, globally accounting for 5% of agriculture products. And this sector is badly impacted.

On the other hand, it caused damage to onions and tomato growing farms. These scenarios ultimately reflect a threat to the food security and economy of Pakistan.

100 Districts were affected by this devastating flood, 60 are declared calamity-hit districts, and 33 million people were affected which is 15% of the population of Pakistan.

It is deadly, with more than 5000km long roads and nearly 243 bridges being broken down and it resulted in an impact of hindrance in conveying the food staples to people who need it. Affected people are relying on the single bite of food on aid that is provided to them with the assistance of the government of Pakistan. There is no system of facilities available, even the system of water supply is not available here. People do not have clean water to drink. In this condition, water-borne diseases are spreading.

In Flood-hit conditions, we should aid the people that are affected by floods. We should stand together to prevent the factors that lead the climate disasters.