You are currently here! Uncategorized Montreal Protocol and its Subsequent Amendments 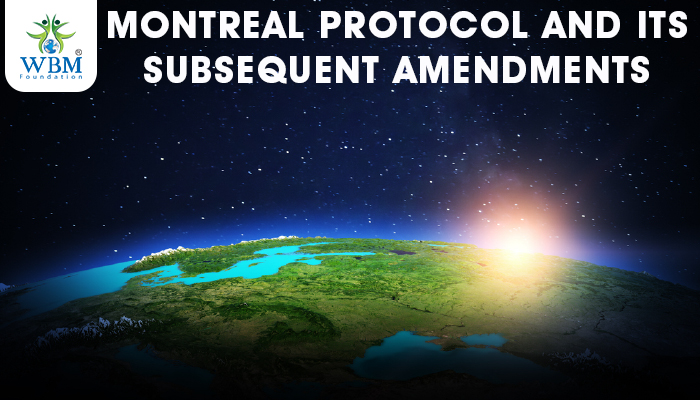 Montreal Protocol and its Subsequent Amendments

Montreal protocol on ozone-depleting substances is a phase-out plan for the production and consumption of chemicals that harm the ozone layer. Montreal protocol is one of the important global environmental protection protocols. This protocol is innovative and worldwide accepted against ozone-depleting substances. Protocol gets a leverage response and all members of the United Nations ratified it. This protocol was ratified in 1987 and came into enforcement in 1989.

Montreal protocol is a framework in which a plan to phase out the production and consumption of ODS in different duration for developing and developed countries.  It is the result of an international corporation solving this problem.  For developed countries, halons are targeted to end up by 1994, and CFCs phase out by 1996.

Amendments in the Montreal protocol for taking measures according to targeting ODS in different duration in developed and developing countries.

In the fourth meeting of the parties, the phase-out plan is accelerated, and also incorporated the HCFCs in the phase-out in this plan for developed countries.

According to this, the phase-out plan now accelerated for HCFC and also for methyl bromide to end up production and consumption up to 2004.

In this recent year 2016, amendments were called Kigali Amendments, in these significant measures should be taken over the consumption of HFC. because this substance is extensively used by industries. This substance don did not have a high potential to disturb the ozone layer but it’s a greenhouse gas and has a high potential to affect climatic patterns.

These amendments are taken in different meetings under the consideration of the recovery of the ozone layer. Under the control measures and with the global corporation resolving this issue. With global efforts implemented the measures regarding ozone-depleting substance. To protect or restore our natural balance ecosystem.