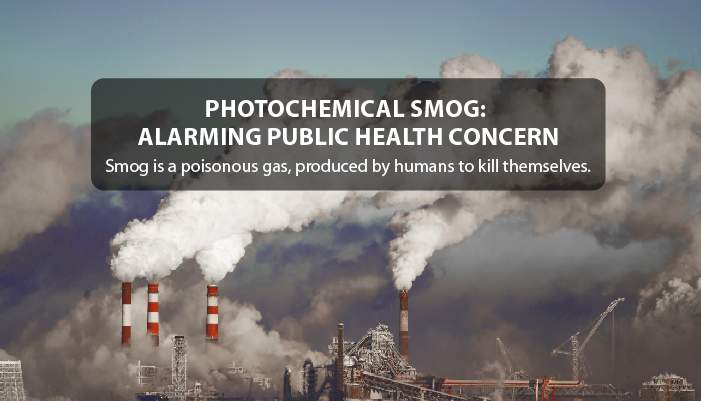 Smog is a poisonous gas, produced by humans to kill themselves.

Smog is the combination of two terms smoke and fog. Photochemical smog is the type of smog that refers to peroxyacetyl nitrate (PAN) formation. Photochemical smog is brown haze resulting from the reaction of oxides of nitrate with volatile organic compounds (VOC) in presence of sunlight. The major constituents of these hazy fumes are oxides of nitrogen, VOC, ozone (O3), and PAN. And these hazy fumes (liquid-gas particles) disturb the health of human life and their activities tend to them to reallocate due to poor air quality.

Smog is one of the major problems that worldwide countries face due to the poor quality of air.

The existing and increasing concentration of smog in the environment is alarming for life on earth. As the presence of these fumes irritates the eyes and respiratory disorders and makes breathing difficult. It also causes temporary infection to become permanent damage to the lungs 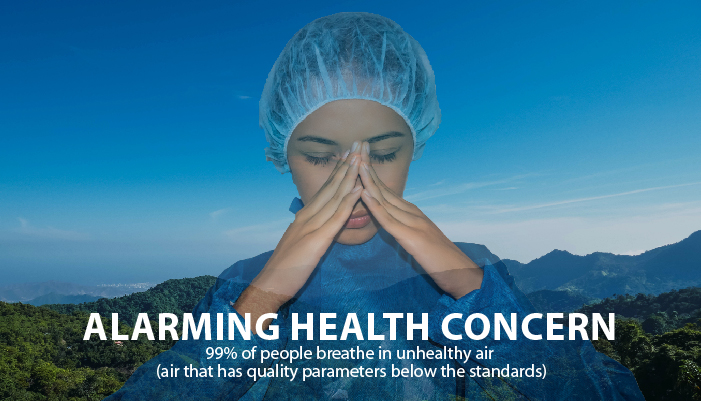 Photochemical smog makes it difficult for life to breathe in the fresh air. In the form of smog, ozone and airborne particles are present at ground level. Ozone in the stratosphere is very helpful in protecting us from ultraviolet radiation reaching the earth from the sun. But at the ground level ozone is very harmful as it is causing itching, eye infections, and skin disorders. It impacts health as it is impacting in the form of the breakdown of lung tissues and is also very dangerous for asthma patients. The presence of smog not only deteriorates life and becomes fatal to life on earth. The rate of disorders regarding respiratory, skin, and eyes increases.

Photochemical smog is characterized as brown haze which greatly impacts visibility. It makes visibility poor, increasing the rate of accidents in the city. In the smog at a very short distance, you can see after that it hinders visibility. Smog is an important alarming parameter in the point of view of public health and a threat to life all over the world. Smog prevails and comes down forming a skyline n morning and evening in winter due to bringing down of temperature.

So, there is a need to stand out for the elimination of smog from our city, country, and world. And to make this world’s air beautiful, healthy, and fresh for this generation and the next generations. Governments of countries stand out to root out the cause of photochemical smog that has a bad impact on life and indulge their life in danger. The causes of photochemical smog are described here:

Developing industrialization, transportation, and wildfire become the major source of emission of pollutants that led to the photochemical smog. These practices are increasing due to urbanization that precursor photochemical smog in the atmosphere. Photochemical smog prevails in the morning or noon in the winter season. Because of atmospheric stability, strong sun rays and lower temperatures led to smog. In this race of industrialization and due to urbanization, most of the country reaches out at the edge of the destruction of their natural environment just as Mexico City is one of the cities that have clean and clear air to breathe, one of a clean city. But in the race of industrialization and due to traffic, surrounded by smog. 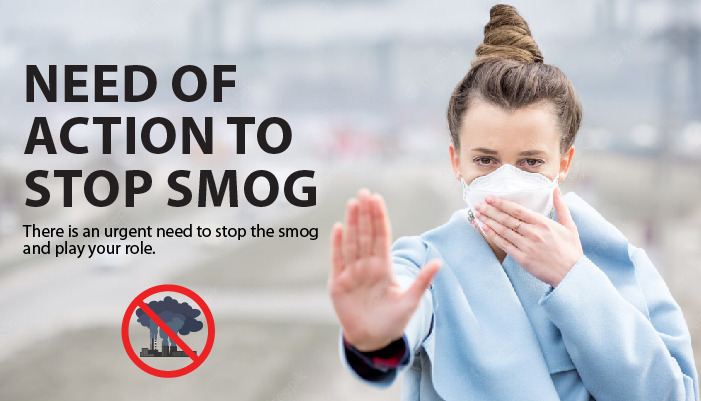 Need of Action to stop smog

There is an urgent need to stop the smog and play your role. Instead of collective action, there is also a need to play the role at the individual level. Avoid the activities that pollute our environment at the individual level. Urbanization in urban countries causes an increase in the number of vehicles on the road and the burning of fuel in vehicles increasing the emission rate of polluting gasses into the environment. So there is a need to discourage the use of private vehicles and prefer public transport. Encourage the use of environment-friendly fuels rather than lead and mercury-containing fuels. Prefer non-motor vehicle for short distances. Discourage and treat the effluent before emitting it into the air. Plant trees into an environment to make the air clean and healthy to breathe in.

WBM Foundation is a non-profit organization that plays an important in restoring the ecosystem through the plantation. WBM foundation plays an important role in giving awareness to the public at national and international levels to discourage activities that harm our environment.

Play your role, stop the smog